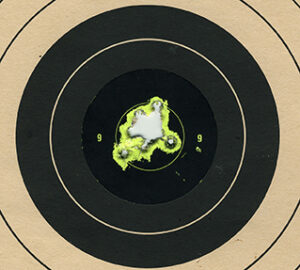 Whether you just purchased your first pistol or you are a seasoned shooter, this article will have some useful nuggets that can make you a better pistoleer, even before you start thinking about accessories.

Pistols require skill to shoot, more than a rifle with a nice LPVO scope. I’ll help you develop some of those skills.

The Rules of Gun Safety

First thing is first, preventing accidental or negligent discharges, which nobody wants.

By following the “big four,” you can make firearm safety second nature.

These apply to any firearm, whether it’s a pistol or a tricked out ruger 10/22.

I’ll add my own favorite safety rule here as well. Always clear every weapon you pick up. Drop the magazine, lock the action open, and ensure there isn’t a round in the chamber.

It’s also not a bad idea to use hearing protection, because pistols are loud.

Always be squared up to the target.

This comes naturally for a lot of people, but some like to angle their body to the side. Twist at the hips instead to plant your feet, but your shoulders should be squared off in the direction you intend to shoot.

Your arms should be firmly out but not locked.

Point your leading toe at the target and your other to the side.

You also want your knees bent.

Pretty simple right. Give it a try.

Another important note. Lean into the shot, not back. For some reason this tends to happen with women more than men, so if you are female then pay special attention to this point.

Your shoulders should be rolled forward. If you are leaning back then you will be off balance, causing more muzzle flip when shooting and generally being less accurate and slower on follow-up shots.

The way people shoot in movies is not the way to shoot.

Grip the pistol in your dominant hand, as high up on the grip as possible.

Many pistols have a little beaver tail above the grip where you should slide the webbing between your thumb and first finger.

Grasp the weapon firmly, but not so tight that it causes your hand to shake.

Your off-hand (non-dominant hand) should wrap around your shooting hand. Specifically, the outer three fingers should grip around those same fingers on your other hand. Thumbs forward, and find a comfortable place for your pointer finger.

I rest mine on the front of the trigger guard, but there are many places to put it, so long as it won’t be cut by the slide on firing.

You can also grip your dominant thumb with the other over the top if it feels more natural.

Having two hands on the weapon will help you manage recoil and steady your shot.

Place the front sight in the groove of the rear sight.

If you have a three dot sight picture, the dots should line up. If not, make sure that the tops line up vertically.

The top of the front sight will be placed directly on the target, typically. Some people prefer to place it a little under the target, but this will be more difficult to shoot accurately.

It can make your shot trajectories seem a little flatter at different ranges, but it’s an advanced technique and not useful for most people.

Some people will also put the front dot directly over the target. This obscures the target and makes it a little harder to shoot well at longer distances.

Wherever you place the aim, focus on the front sight. The front post should be razor sharp, which will cause the target to look a little blurry, but this is the most accurate way to focus your eyes.

Simple to learn, yet impossible to master.

The art of squeezing the trigger is perhaps the most difficult part of shooting for a novice.

The trigger should be squeezed. The first thing you will feel is take-up, where the trigger moves freely without doing anything else. Then there will be a wall of resistance, this is where the magic happens.

With the pad of your finger on the center of the trigger, squeeze straight back while keeping your sights on the target.

That’s it. Simple right? It does take some practice, and controlling your breathing can help as well. Whether at the top or bottom of a breath, hold it for just a moment as you squeeze.

One way to get really good at this is to practice dry firing while balancing a dime on the front sight. Repeat until you can drop the hammer without the coin falling. You might think it’s impossible at first, but keep trying till you get it.

Then go to the range and watch your groups shrink.

Hopefully, this article taught you some cool tips that you didn’t know or didn’t think about before, and it will make you a better shooter.

By following the advice here, you will go from novice to good shooting very quickly, but it is important to practice. Shooting a pistol well isn’t easy, and it’s a good idea to return frequently to the range until you can produce a decent group at 10 yards.

Then you’ll know that you are a shooter. For more advanced techniques, read this article on 5 Tips to Improve Your Accuracy. Have fun.

Richard Douglas writes on firearms, defense and security issues. He is the founder and editor of Scopes Field, and a columnist at The National Interest, 1945, Daily Caller and other publications.