Having a proper understanding of what your pistol sights do and how to use them properly can do wonders to help your accuracy in target shooting, competition, and defensive scenarios. In a perfect world we’d be able to acquire sight alignment, sight picture, and put the sights on the target with equal height and equal light showing through the front post and rear sight. 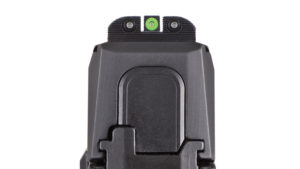 As you can see, both front and rear sights are the same height with the front post centered between the rear sights allowing the same amount of light to pass on either side. When those sights are placed on your target at your chosen distance, that makes your sight picture.

But, we don’t live in a perfect world, and things rarely go as planned, especially where self-defense is concerned.

In a practical defensive shooting scenario, we may not have enough time to properly align the sights as shown above. Instead, all we can rely on is our training, finding the front sight as quickly as possible, and using our shooting fundamentals.

After all, the closer the bad guy is to you, the less your sights matter because of reaction and having a larger target.

Focus on Front Sight or Target?

There is a lot of debate out there coming from different pistol instructors about if it’s better to focus on the front sight or the target while shooting.

The best thing, and what most instructors teach, is to focus on the front sight while shooting unless you cannot for some reason like if the target is too close. If the target is right on top of you, you won’t be able to focus on much of anything but the target.

Having said that, while you should focus on the front sight, proper sight picture includes also knowing your target and having the ability to track the target should it start to move while still engaging you.

You should therefore still be able to see the target beyond the front sight.

Shooting at multiple targets may seem intimidating, but at its very core it is quite simple. Things need to happen in a specific order:

You must be aware that there is another target that needs to be engaged, then you need to shift your eyes to that target. Finally, you move your muzzle/sights to your eyes, find your front sight, and engage the target.

You can practice this in the comfort of your own home using nothing more than your eyes and your pointer finger.

Become aware that the clock on the wall is now a target, shift your eyes to it, and then extend your arm fully, pointing to it with your trigger finger.

Then, while still pointing at the clock, become aware that your houseplant is your next target, shift your focus/eyes to it, and then move your finger over to it.

If you’re like most people, you’ll be able to point exactly at that target with your finger just a moment after seeing it with your eyes. Your finger should point directly at the clock, plant, or whatever else you want to use.

When you do this with your gun, the same principle applies. The only difference is that the other shooting fundamentals, like your grip, have to remain intact.

ONE EYE OR TWO?

This tip admittedly doesn’t necessarily help your accuracy out in terms of what you may be thinking but it still has importance in the context of defensive shooting, and winning the fight.
Shoot with both eyes open. If you can, that is. Some folks are medically unable to use both eyes when shooting, so this does not apply to them.

There are a few reasons why shooting with both eyes open is better. First, if you’re presented with a threat in real life, you’ll likely respond to that threat by keeping both eyes open, not closing one of them.

Second, you’ll have increased peripheral vision and, therefore, better situational awareness should there be multiple attackers you need to defend against.

There are inherent problems with using both eyes, however. For example, you’ll likely see two guns. You’ll see one gun directly in front of your dominant eye and your aligned sights, and another at a slight angle from your non-dominant eye.

You will probably get to a point where you don’t even notice the second, angled one after practicing for a while. But, it could still trip you up, at least at first.

It should also be said that shooting with both eyes open is generally meant for defensive shooting distances of no more than 15-20 yards away. If you ever need to engage a target further than that, closing the other eye may help.
You won’t always have time to acquire proper sight picture. When you can, it’s great. However, you may also want to practice shooting without your sights, just to make sure you can, as well as figuring out to which distances you can effectively do it.

Read more of the eBook