Throughout my law enforcement career, the most compact firearms for on and off duty use, as well as for undercover applications, were short barreled .38 special revolvers, or Walther PPK/PP pistols in .380 ACP caliber.  Later on in my career, the available options expanded a bit, to include a number of compact and sub compact handguns that were manufactured in stainless steel.  However, none of the most concealable handguns for super concealed carry were chambered in more substantial calibers. I mention all this, because throughout the bulk of my law enforcement career, I wondered when and if the day would come, when the firearms industry would be able to manufacture, a flawlessly reliable semi automatic 9mm pistol, that was as compact as a Walther PP/PPK.  One of the first companies to do so was Kahr Arms.

The first Kahr Arms Pistol I ever handled belonged to a police officer on Cape Cod.  The day I compared my friend’s all steel 9mm Kahr 9 to my (French) Manhurin/Walther PP Pistol, I knew that the firearms industry, in particular Kahr Arms,  just took a giant leap into the future. Bear in mind, that Kahr Arms began manufacturing their now famous line of pistols in the mid 1990s. This was a few years shy of the 21st Century and I was finally holding a very compact 9mm pistol, that had a super smooth DAO trigger, that was a dramatic improvement over the PPK/PP pistols, that I carried when I worked undercover.

Before I go any further, you have to understand, that during my LE career when I worked undercover, I would have preferred to carry a sub compact handgun that was chambered in 9mm I felt this way, because when I worked undercover, I usually met one or more major violators while alone, with an unarmed source of information/informant, or with another UC agent who was armed.  When I took three trips to the coast of Colombia on a 100 foot UC vessel in 1990, the most compact handgun I carried was a stainless steel Walther PPK .380 with several spare six round magazines.

Even though my fellow U.S. Customs Agents and I kept 9mm service pistols, an M16, several Colt CAR 15s and Parkerized Remington 870 shotguns hidden all over our vessel, my government issued stainless steel Walther PPK was the firearm that would likely be deployed first, if the you know what hit the fan. This was a serious concern, because we lived in cramped quarters with two major violators on one of the return trips from Colombia.

As innovative as the all steel Kahr 9 was at the time, the pistol that I really wanted, was the model that would become known as the Polymer Kahr 9, or the P9.  I felt this way, because the P9 was lighter to carry, especially in an ankle holster.  The question that I was especially interested in answering, was would the lighter Polymer Kahr 9 be just as comfortable to shoot as the all steel Kahr 9.

The first time I fired the P9 that I currently own, I immediately knew that this pistol was a keeper.  I felt this way, because after decades of training and field testing a wide variety of firearms, I developed arthritis, which is made worse by age.  Having arthritis has made me more sensitive to recoil than ever before.  The good news is, that I was pleasantly surprised when I pulled the trigger for the first time and I found the lightweight P9 to be pleasant to shoot.  The fact that my Kahr P9 has been flawlessly reliable, also gives me the confidence to use this pistol as a Personal Defense Weapon.

As someone who has utilized Talon Grips on various pistols, I decided to install a set of the new Talon Pro Grips on my Polymer Kahr 9.  I decided to do so, because even though Talon grips are relatively thin, they improve on the original design in two critical areas. The first improvement involves increasing the overall circumference of the grip, just enough to improve ergonomics.  When I say “just enough,” I am specifically referring to the noticeable increase in the ability to grip a pistol with more confidence.  This is accomplished by wrapping the original polymer grip with the relatively thin set of Talon rubber grip material.  The texture of a thin set of Talon rubber grips also helps the operator to hold onto a pistol, especially when the firearm is discharged or when your hand is wet.   This capability can also prove to be very helpful when shooting with your weak hand under stress.

The Talon Pro Grip provides increased texturing, that is aggressive enough to improve your ability to grasp and securely hold onto your pistol.  Quite frankly, I wasn’t sure if I would like this level of texturing, but once I handled and fired my Polymer Kahr 9 I became a fan. As far as my P9 is concerned, this pistol delivers in all categories and is definitely worth owning. 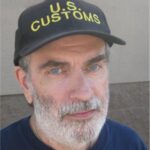 Nick Jacobellis is a Medically Retired Senior Special Agent of the U.S. Customs Service who was physically disabled in the line of duty while working in undercover operations. Prior to joining the U.S. Customs Service the author served as a police officer and investigator for various law enforcement agencies in New York. To date, the author has published over 180 magazine articles and eight books.

The author has a Bachelor of Science Degree from John Jay College of Criminal Justice, is married and has two sons and two grandsons.